Tibetan spiritual leader the Dalai Lama greets his followers at his arrival at the Buddhist cultural school in Salugara on the outskirts of Siliguri on March 27, 2013. The Dalai Lama expressed his sorrow for the self immolation protests going on in Tibet while speaking to journalists on his first day of a three day visit in Salugara, India’s West Bengal state after an inauguration ceremony of a 130 foot Lord Buddha statue at Buddha Park. AFP PHOTO/ Diptendu DUTTA (Photo credit should read DIPTENDU DUTTA/AFP/Getty Images) 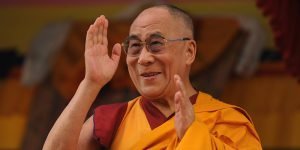